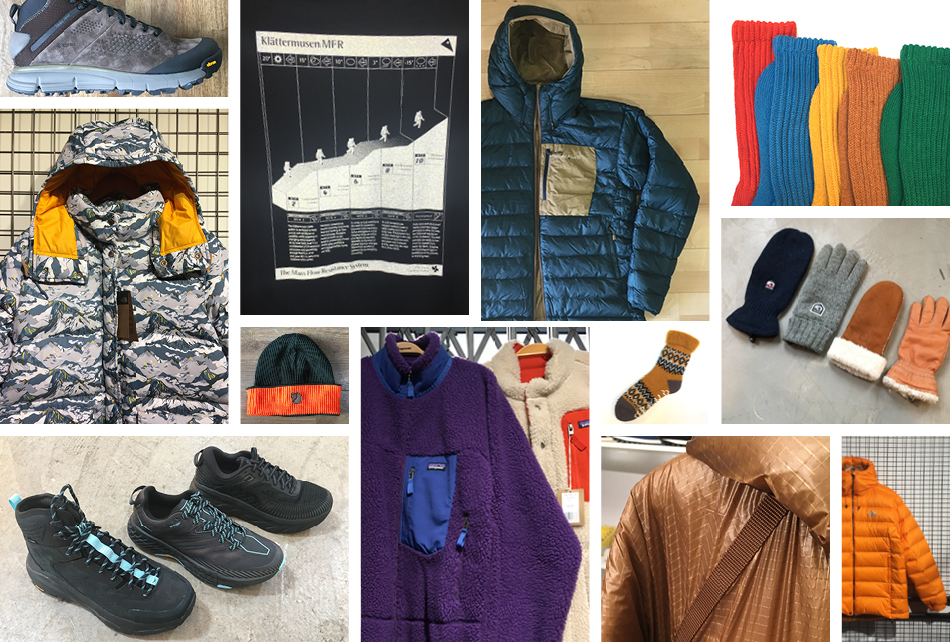 We may already have moved into Autumn, but the season known as AW20 is only just getting itself going, and we thought it high time we sent out a little Insiders guide to some of the bits we’re most looking forward to arriving at Outsiders this season.

We couldn’t have called it ahead of time, but a shawl collar, snap closure, polka-dot-deep-pile-fleece cardigan is one of our favourite women’s items inbound. That and new colours of the classics should keep the Patagonia fans happy, and warm.

A new one to our rails this season – but one long in our hearts. We’ve a solid selection of hard to beat down jackets from a brand that knows more than most about keeping people warm when it gets cold.

An undisputed Outsiders favourite, we’ll have more of the inimitable Sky Kaha coming in. Introduced last winter, but updated for this season with a GORE-TEX lining. It’s now called the Kaha GTX.

The behemoth that is The North Face have produced the goods this season – one of the strongest ranges we’ve ever seen. On the Women’s side, the Cragmont cardigan – maybe our favourite of all the fleeces we had last winter – is back, with a couple of new siblings; a popover, and a long version. Perfect. Oh, and there’s a limited edition liberty print down parka!

And for the men, they too get some top drawer fleece options, but it is the return of the iconic Expedition Systems logo (who remember that?) that we’re excited for. The Lhotse down jacket and Pumori fleece are not to be missed.

Oh - yes, there’s an ‘Oh’ for the men too – and there’s something coming later in the season that we can’t show pictures of or talk about yet. You’ve been warned.

We welcomed Goldwin onto our shelves for SS21 with some pops of bright GORE-TEX. This season is coming in a little more winter-ready, and we’re fine with that. We have one of the sharpest shells we’ve ever seen arriving alongside a down jacket that looks better from behind than any other down jacket we’ve ever know. There is also the best (and, yes, most expensive) do-it-all down parka coming too – not photos of that though, so you’ll just have to take our word for it for now.

Every season has us waiting impatiently for RoToTo to send us the ultimate batch of socks. And we have more than ever coming this year. Their classic slipper socks, nordic socks, and double face socks make an ever welcome return, but it is the colours of this winter’s Loose Pile socks that have us most excited.

There’s just a certain something about donning a nice pair of gloves. And Hestra and Elmer know a thing or two about nice gloves. From fine leather, through classic wool, to deep pile fleece, we should have everyone, or every hand at least, covered.

With an all new popover anorak cutting a clean silhouette in traditional Fjallraven style for the men, and the longest and luxurious…est down parka we can remember seeing for the women, Fjall might not have the biggest range of new styles in the mix, but they have a couple of the best.

The latest colourway of the new-age-classic Trail 2650 Boot is coming. And it’s a good one.

That, and an update to the all-time-classic women’s Mountain Light – it now has the GORE-TEX lining treatment. It’s just the same. But better.

We’ve already had a couple of deliveries from Montbell. But we are about to receive a batch of their world famous Down Jackets. They sell quick, so be ready. It might not be for everyone, but our shout is for the brown one. Brown Down. It makes sense.

We love everything Klattermusen. But their reflective print MFR (Mass Flow Resistance system) t-shirt is just something you should definitely buy.

Did we already mention Brown Down. Well, this isn’t down. It’s synthetic. And it’s not Brown. It’s ‘Coyote’. But it’s still a dream of a jacket.