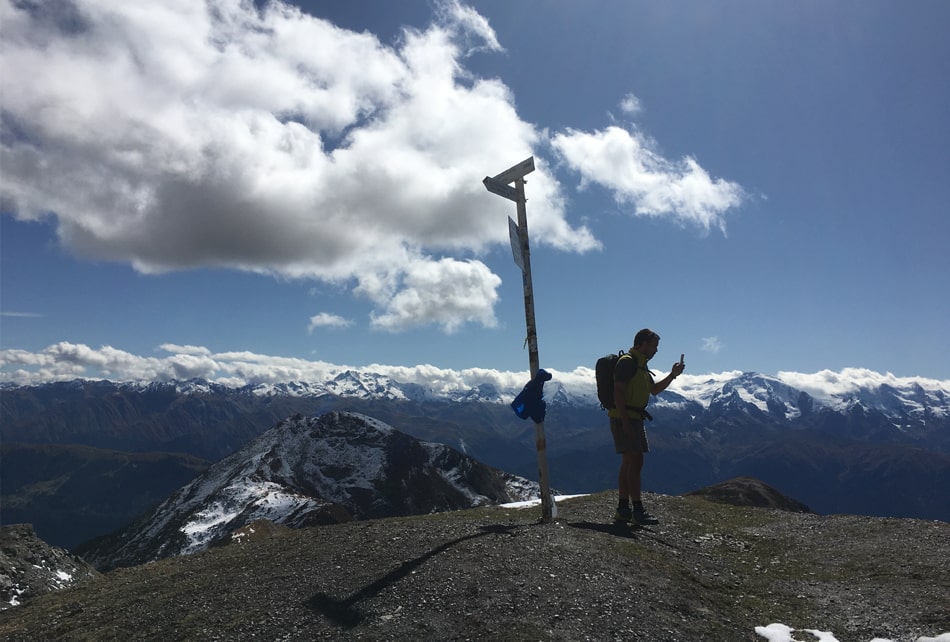 This former Soviet state is one of the fastest developing and most open minded of Europe’s eastern bloc. Years behind the iron curtain lifted, Georgia is headed for the future…

After the sensory overload of Istanbul, and a taxi journey from the airport that felt more like a joyride (without the joy), we landed in Tbilisi, capital of Georgia. 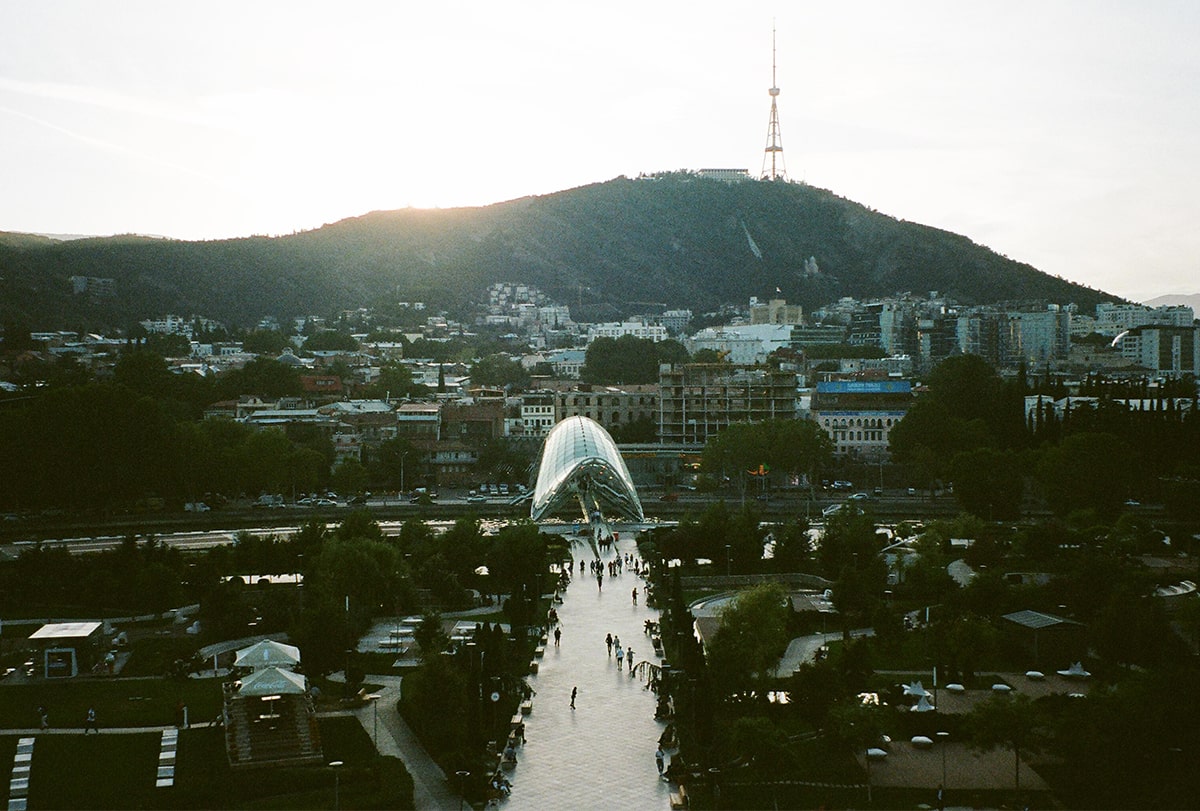 On arrival to our Airbnb we’re greeted not only by our host, but also by the greatest full wall VHS display I’ve seen, there’s no depth, merely 30 odd titles spread artfully across a huge floor to ceiling shelving unit, standouts include Jurassic Park and a few recorded concerts from an '80s Greek lothario I can no longer recall the name of. The bottom shelf has a VHS player, the plug coiled on top.

Outdated relics and new wave kids – Tbilisi is a tale of two cities; one drawn to its familiar Soviet past, the other charmed by cosmopolitan Europe. Relations aren’t too good with Russia, after all they did illegally annex two Georgian states having invaded Georgia in the early ‘00s. Georgia increasingly looks to imitate and ingratiate itself with western Europe. Georgia lies to the north east of Turkey and also shares borders with Russia, Armenia and Azerbaijan, and is considered to be at the crossroads of western Asia and eastern Europe. 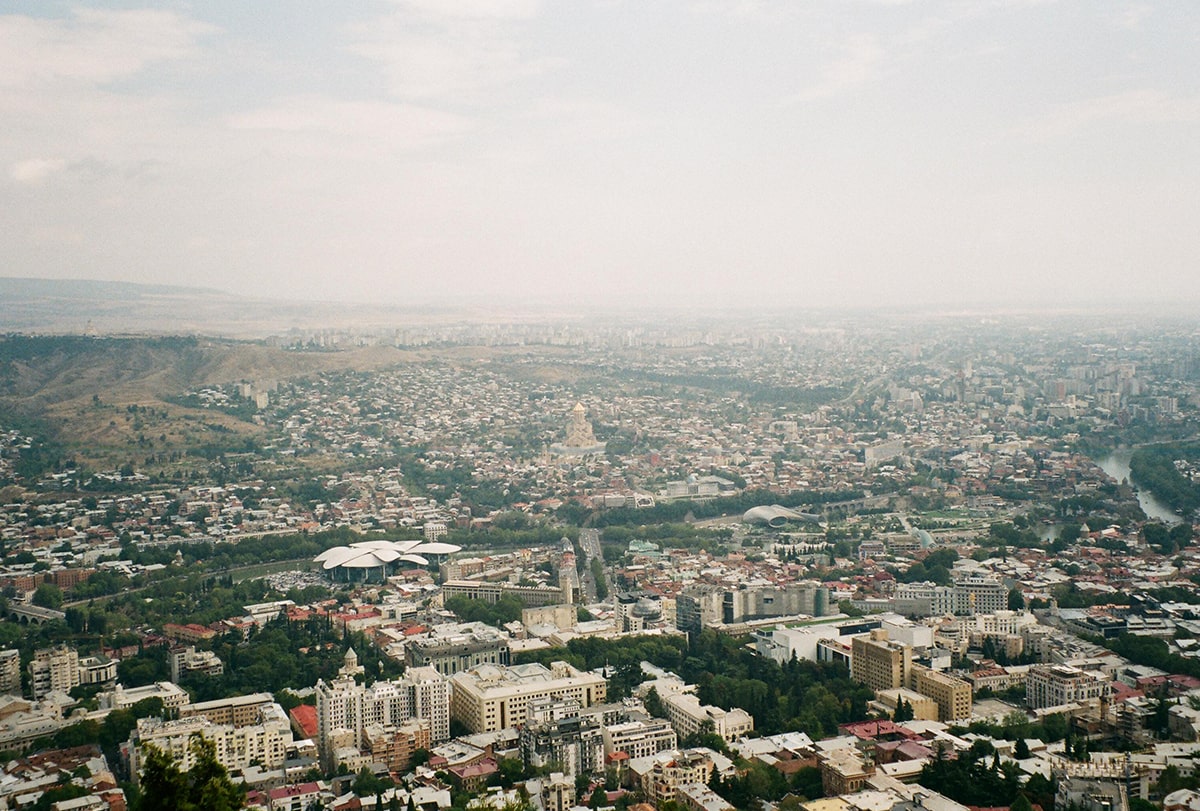 Home of a burgeoning club scene, sometimes compared to Berlin, Tbilisi is throwing off its Soviet cloak and making for a very different future. A city with two diametrically opposing versions of itself, the old town has an unsurprisingly old town romance about it; twisted tumbledown buildings and climbing plants, whilst the new conceptual architecture of the cylindrical Concert Hall and Peace Bridge look like structures that would be built on a colonised Mars of the future. Throw in some Soviet brutalism and you’re probably getting the picture. 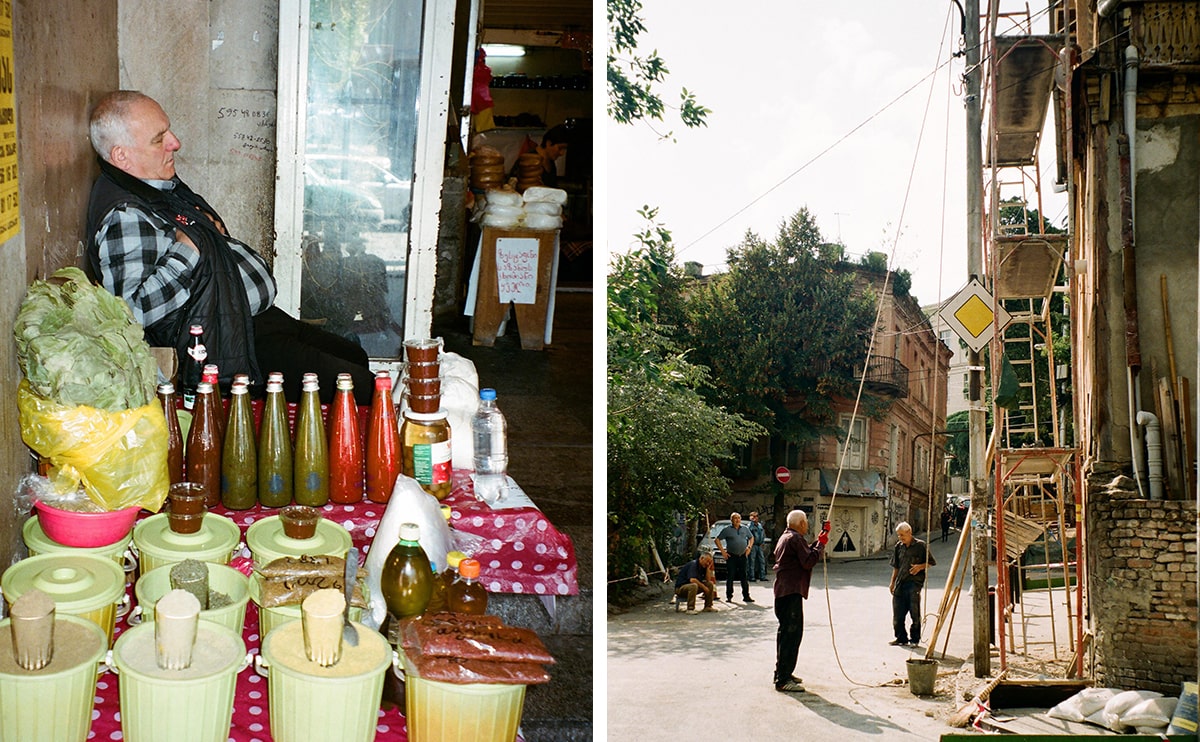 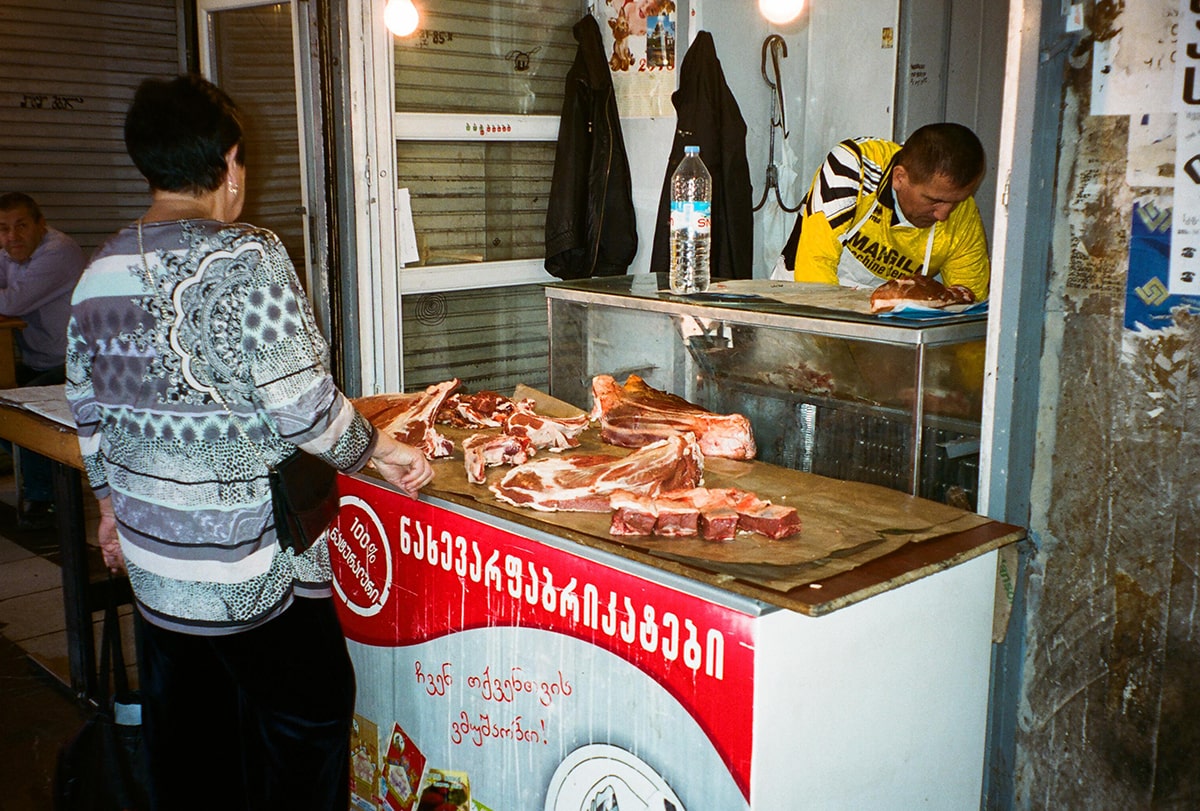 Tbilisi’s roads are congested to choking point, an invisible smog hanging in its valley air. For a city with a population of little over a million, the level and intensity of traffic is mind boggling. But a big bottle of Pilsner is £1.50, and you can also get a good coffee, although that doesn’t come for much cheaper than back home. Tbilisi was also the first place we got to sample Khachapuri, a traditional Georgian cheese bread that uses the salty native Sulguni cheese to great effect, the Adjaruli version we were to sample later on in the trip was the winner by a margin; a boat like bread shape, filled with melted Sulguni cheese, an egg and butter added after it comes out of the oven. Using a fork, you mix it all up and then tear off the bread and dip it, like a primitive fondue, it’s heavy, simple but brilliant food and best after a day in the mountains washed down with a cold beer. 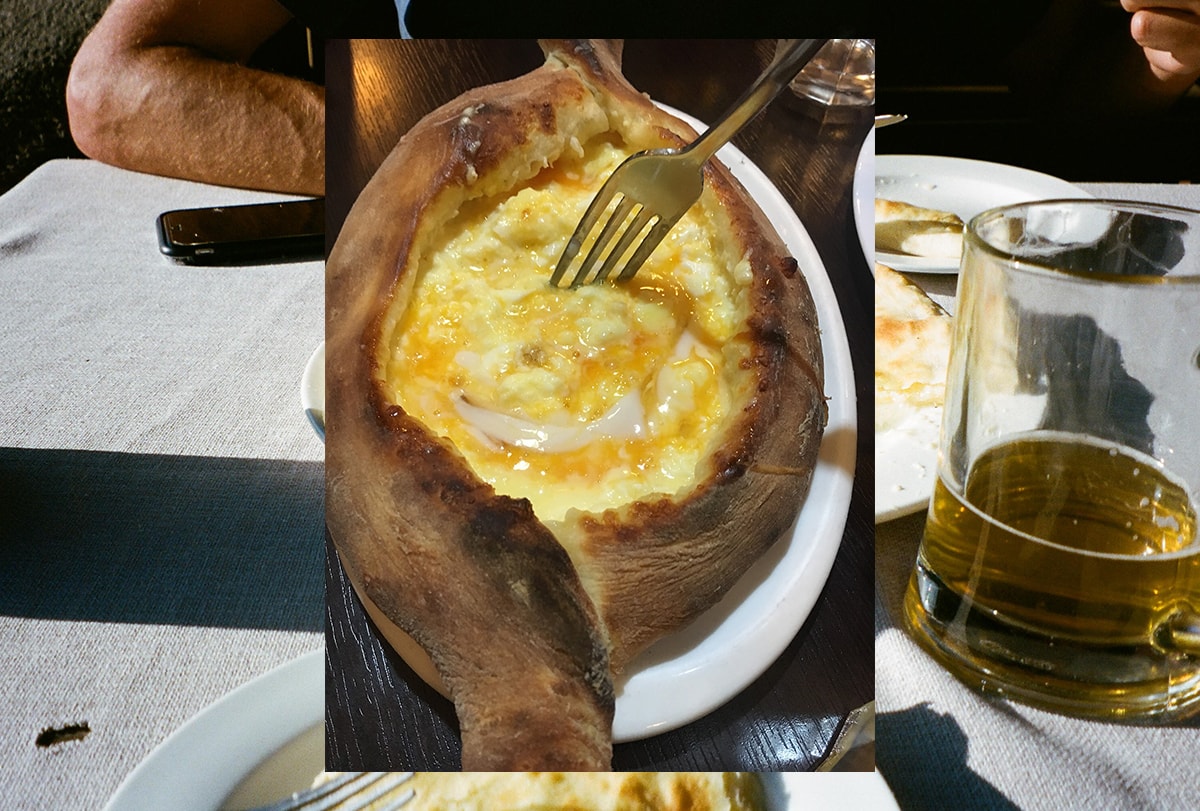 From Tbilisi we headed north to Svaneti Province and the Caucasus mountain range. We took the old Soviet sleeper, which rumbles slowly through the night to Zugdidi; an uncomfortable night spent tossing and turning and waking often, crumpled at the point where the wall and fold-down bed met, overheating in the stuffy atmosphere - still it’s an interesting way to travel. On arrival in Zugdidi we were sleepily sorted into Marshrutka’s to make the three-hour odd journey up to Mestia. A Marshrutka is basically a minibus, usually driven by a comically angry driver with a death wish. The old Mercedes Sprinter we travelled in is revved and pushed to its limits with fifteen bemused tourists in the back, flung from side-to-side as it weaves its way up into the mountains. There’s a stop at about 7:30 to eat chocolate cake for breakfast, it’s quite good to be honest. 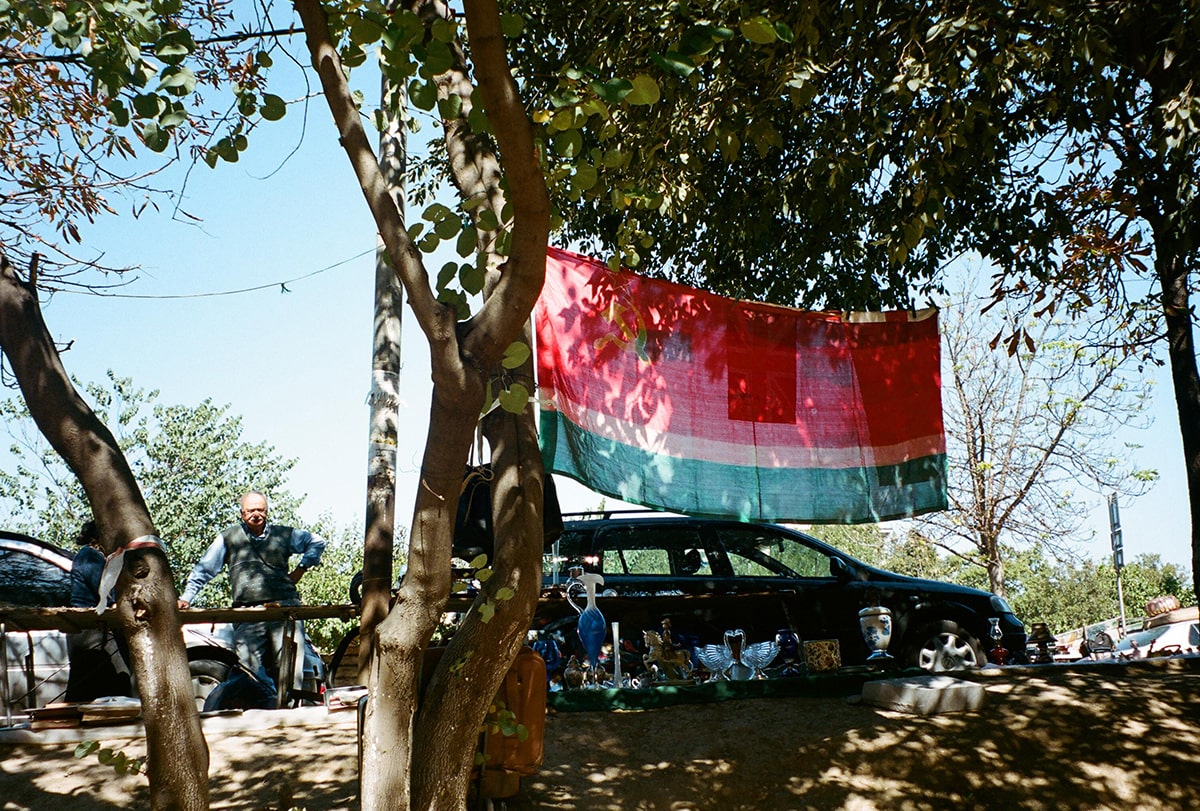 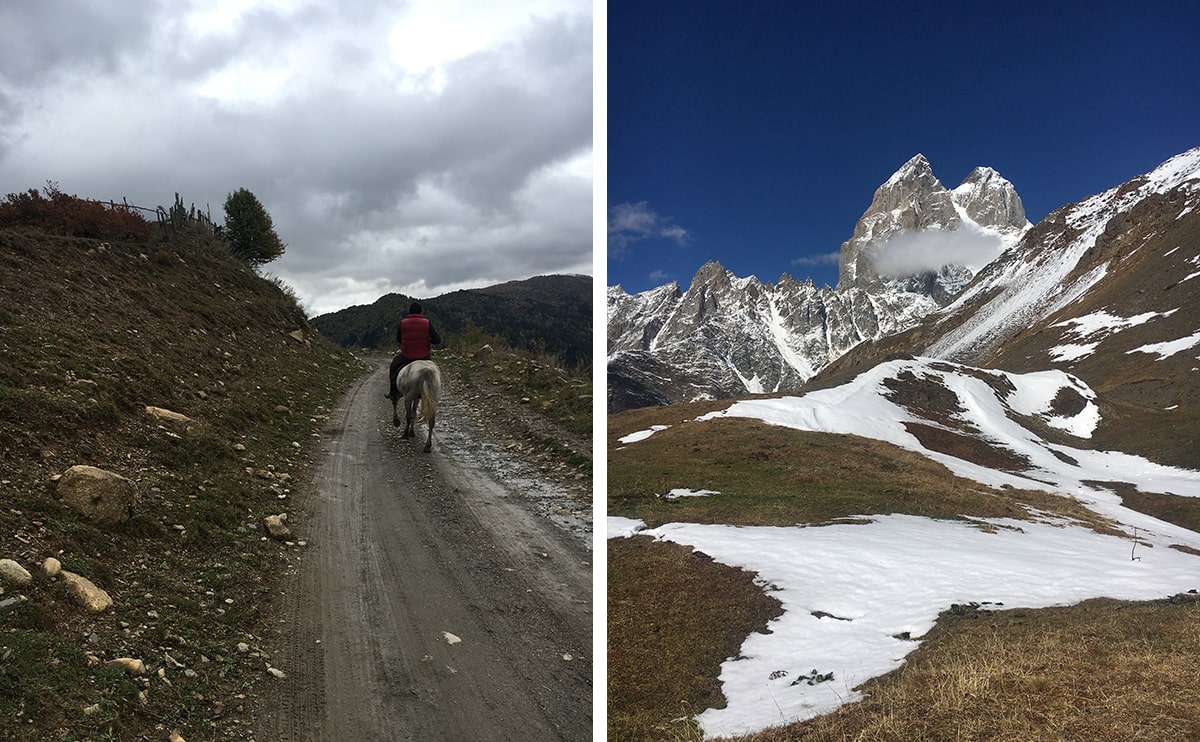 Mestia, has something of the wild west about it, its fresh mountain air feels good in the lungs after Tbilisi’s stifling pollution. Huge stray mountain dogs roam alongside the local livestock, often found wandering the streets. After the white knuckle, life flashing before my eyes experience of the Marshrutka, I’m nearly finished off, instead by the shower screen in our guesthouse which explodes when I try to close it.

A lot of people are in Mestia to make the four-day trek to Ushguli, a UNESCO protected medieval village. Mestia though is also suited to being the base for day-treks with a host of incredible walking routes up to the snowline, with the spectacle of the Caucasus mountains highest peaks rising up to and over 5000m all-around. On day one we trek up in damp overcast conditions and finally make our way down, following the ridge line to the village of Tsvirmi, pigs wander in the deep mud paths of the village and the protective working dogs go wild, our entrance also causing a stir amongst the locals, who look at us with a grin and point the way out towards the road. 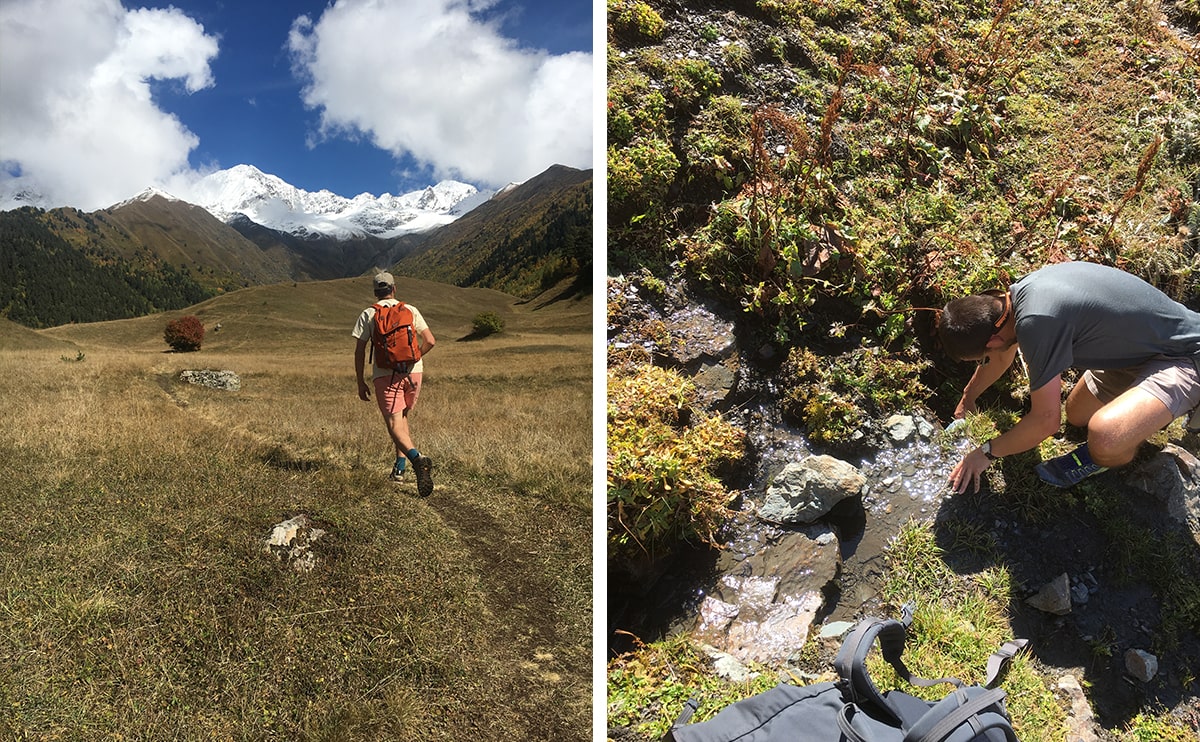 We’re a fair few miles from Mestia by this point and the idea is to thumb a lift back to Mestia from the main road. As we wander away from the village, two young guys sit in an old Toyota Landcruiser, they’re a bit sketchy and the driver grins, even if it’s a touch menacingly. They offer to take us back to Mestia for 50 Lari, equivalent to about £13. We say that we’re alright and we’ll make our way on foot, they then roll slowly up by us and the driver says 40. Tom (who I’m travelling with) and I look at one another, shrug our shoulders and say alright. We get in, no seatbelts – there are never any seatbelts in the rear of Georgian vehicles. Sometimes there aren’t even bumpers but that’s another story.

We started rolling down the mountainside, the rocky track slow going. The driver sits on a wooden bead cover as we rock back and forth. He fires up the stereo and dark brooding Russian rap blares out, this is cinematic but the sort of cinema where mine and Tom’s characters don’t fare too well. As soon as we hit the flat tarmac of the road back to Mestia, the accelerator pedal is slammed to the floor and we start haring it down the mountain, powering into the apex of the corners, the big grippy, off road tyres cause the whole vehicle to quiver as our driver jumps on the breaks far too late, this is genuinely frightening. But, in a moment that Martin Scorsese would be proud to shoot, we come across a Church – Georgia is a secular country but the population is largely Eastern Orthodox Christian and the church is revered – the driver slows and mutes the music, for the first time the passenger pulls down his hood, they both cross themselves as we pass and in a final devout moment the driver runs his right hand down the rosary hung from his rear view mirror, holding the crucifix for a moment longer. The church sliding into the rear view, the passenger’s hood goes back up, the speakers kick back in and we’re back to hurtling down the mountain. We get back to Mestia, largely grateful to still be alive. 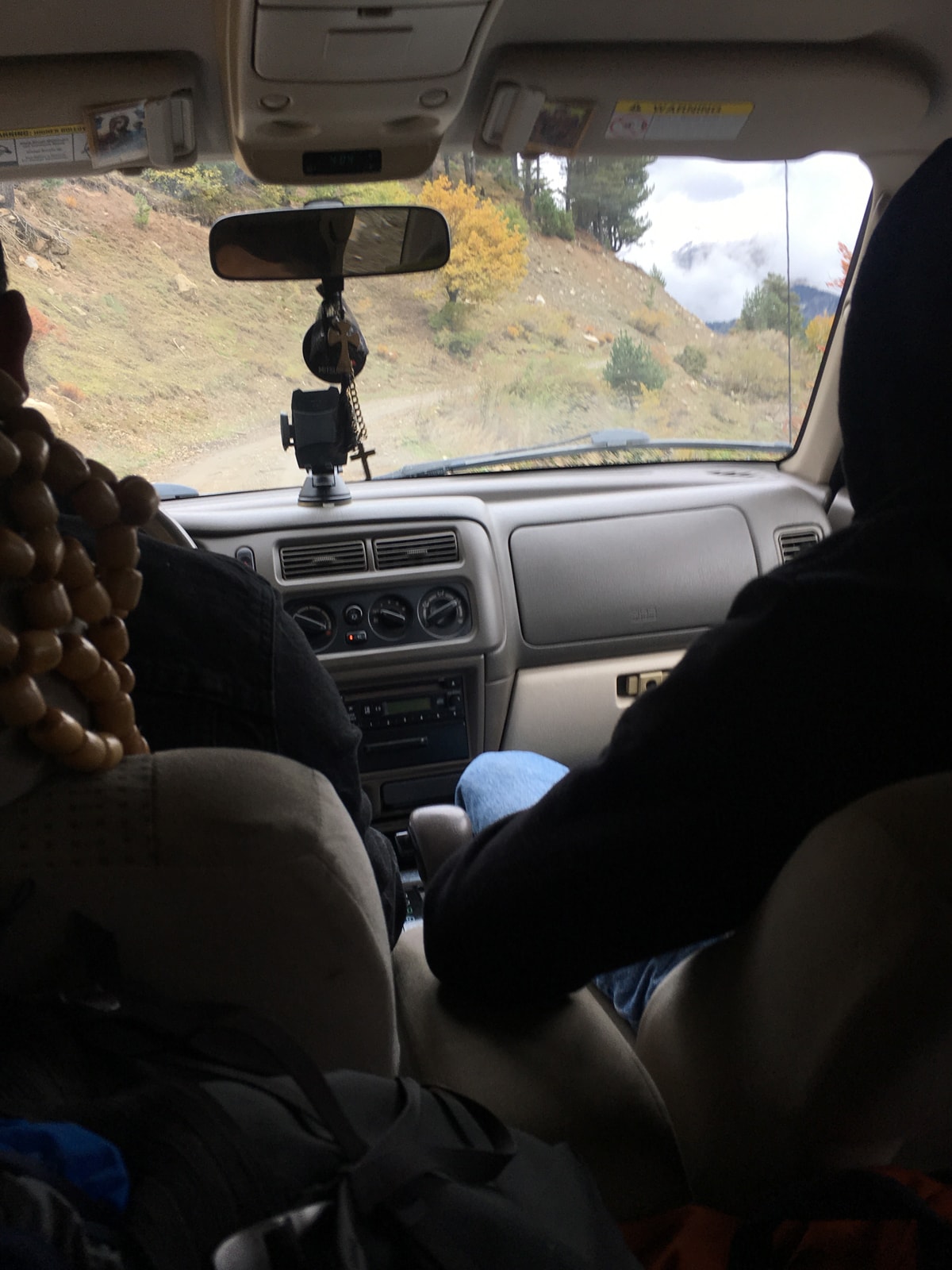 Our final trek is a mammoth 17 miler, which goes from Mazeri over the Guli Pass back to Mestia. The Guli Pass is up at 3000m with stunning views of Mt. Ushba, which at 4,710m is a daunting site and known locally as the Witches Sabbath because of its resemblance to two pointed witches’ hats. Trudging through the snow at the pass in shorts, with the sun beating down is an odd juxtaposition. We see a few people hiking like us, but this place feels truly untouched and it’s some of the best hiking I’ve ever done, the views and experiences are stuck in my mind and the warmth and generosity of its people too, I want to go back. At the moment a team of volunteers are working to build a long-distance hiking trail through the Caucasus mountains, taking in Georgia, Armenia and Azerbaijan, with the aim of creating a continuous uninterrupted trail in the style of the Pacific Crest Trail and its ilk. 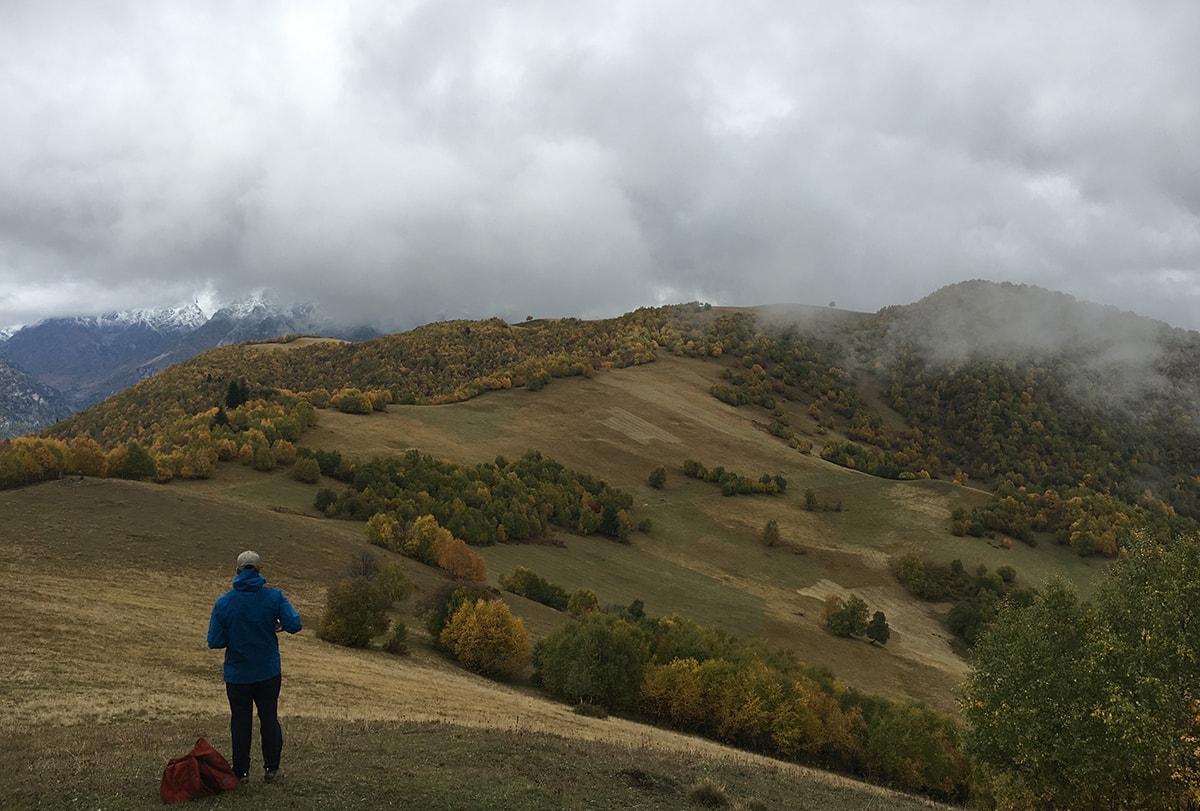 So, no doubt I’ll return and be eating cheesy bread for lunch in the mountains and maybe, chocolate cake for breakfast.

Find out more about hiking the Caucasus here. 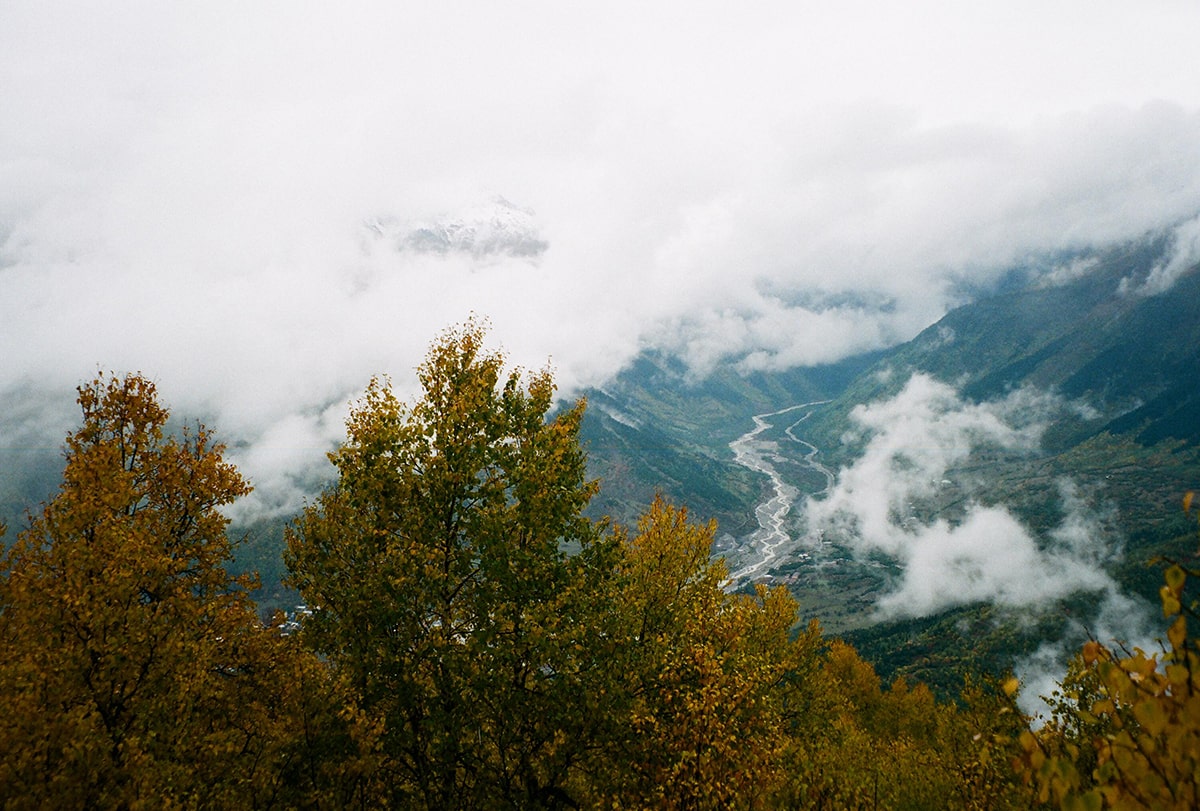